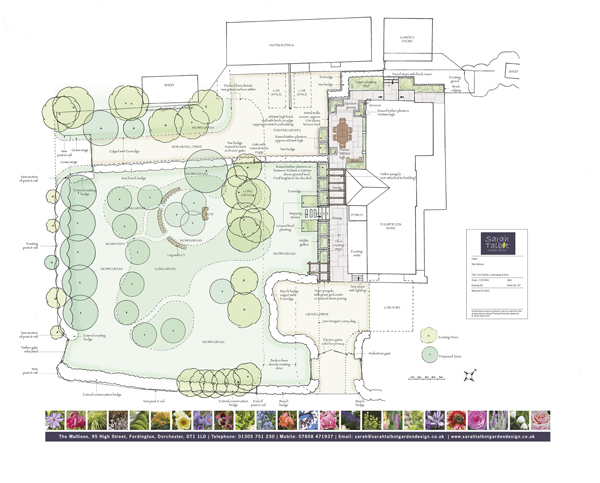 The barn has been beautifully converted to a home, with large gardens to the front and back.  Phase 1 of the front garden, will begin this spring as soon as the weather permits.

ANALYSIS AND THE BRIEF

The area currently comprises a field and gravel drive with parking and when the trees are bare, this house is overlooked.   The existing terrace has a sharp drop and is very long, dominating  the front of the building.  The parking area is being relocated and an additional drive and new entrance created, to the lovely old outbuildings with a view to possible conversion in the future. The field and part of the original drive will now become the garden.

Easy maintenance is needed, particularly as there is a large garden at the back, plus screening from passers by and colourful planting close to the house that gives year round interest.

Holm Oaks will be transplanted as evergreen screening, the field cultivated as a natural, informal garden with areas of long grass and wide, mown grass paths, centred around fruit trees, log walls and seating area in a small glade.

Large, custom made oak planters will be situated adjacent to the terrace, with a new set of steps to the front door.  A chunky timber pergola to connect the planting with the house, at the same time giving some welcome shade inside.

A Coastal Garden in Swanage

ANALYSIS AND THE BRIEF

High above the bay, sits a new, superbly designed contemporary house with views of the sea from all the upstairs living areas; a sloping garden lies on the inland side of the building.  The owners want a beautiful garden to look at, which is easy to look after and will complement their striking new home.

The usual coastal conditions of salt laden air and gusting winds applied, but in addition the soil was virtually solid clay and this needed some careful consideration.  The site had once been quarried and the ground had never been cultivated for domestic purposes.

Minimal maintenance was high on the list, as was easy access when walking in the garden and they were very keen to have plenty to see from inside the house, during the winter months.

Although clay is very fertile and high in nutrients, it’s nigh impossible to work with, unless it has been thoroughly cultivated over a long period of time with masses of organic material, sand and grit.  So we decided not to disturb the clay, instead the design focused on raised, oak beds, filled with top quality eco-soil.  Paths of natural stone paving slope gently and wind their way around the garden, with an elevated seating area that can also be reached by shallow, wide steps.

To heighten the feeling of being near the sea, we planted into shingle, adding some larger sea-washed pebbles here and there.  These plants thrive in the salty air and were chosen to ensure there is always something in flower throughout the seasons.  The different grasses sway in the breeze and make a lovely connection with the surrounding countryside.

The clients had brought some artefacts from their previous garden, including a particularly lovely, rocking chair, all of which were included in the new design.

The ‘after’ pictures were taken in the first 18 months of the garden.